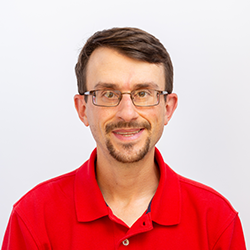 Dr. Nicholas Zoller has served at SNU since 2009. Dr. Zoller is passionate about numbers and loves seeing students reach their full potential in the sciences. Since 2012 Nicholas has served as the Director of SNU’s Summer Research Experience, providing opportunities for current SNU students to work alongside our faculty in Summer Research projects preparing them for their future careers in the sciences. Since 2012, Nicholas has served as the institutional representative for Oklahoma Space Grant Consortium at SNU. Nicholas has also served as a Mathematical Association of America Project NExT Fellow, 2010-2011; student paper competition judge at annual meetings of the Oklahoma-Arkansas Section of the Mathematical Association of America, 2011 – 2019; faculty sponsor of SNU Putnam Exam teams, 2018 – 2019; faculty sponsor of SNU Mathematical Competition in Modeling teams, 2017 & 2019.