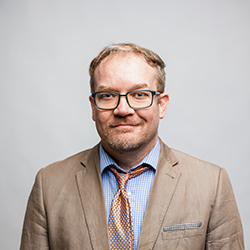 Dr. Shawn Pendley has served at SNU since 2021. Prior to serving at SNU Shawn served at Southwestern Christian University as an English Professor and Chair of the Department of Humanities and Sciences.

As well as being an excellent educator in the classroom Dr. Shawn Pendley has an active career in creative writing. Shawn was an invited to be a contributor at Bread Loaf Writer’s Conference, 2019; Invited to deliver a paper on Satanic figures in detective fiction at the inaugural Ann Radcliffe Academic Conference, 2018; Served as Academic Chair of the Oklahoma Educational Studies Association, 2013; edited the critically praised 2008 book, Mary Wollstonecraft: Philosophical Mother of Coeducation, by Susan Laird (published by Bloomsbury).

Hobbies or Fun Fact: I have nearly completed a novel for which I was invited to the prestigious Bread Loaf Writer’s Conference. While there, two publishers and one agent expressed interest in it. I wrote my first creative piece when I was ten years old, a fourteen-page play about an airplane lost in the Bermuda Triangle. My father kept copies of it and still has it in his possession. Another fun fact is that I read Ancient Greek and Latin and have been at work on a translation of Clement of Rome’s Letter to the Corinthians, written in Greek in the first century. Finally, on no fewer than two occasions, when I have mentioned that I’m Episcopalian, people have asked me why I worship aliens.