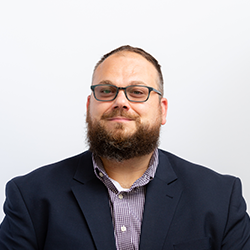 Ricky Spears is the Director of Bands and Assistant Professor of Trumpet at Southern Nazarene University. At SNU, Spears directs the Sound of the Storm Marching Band, Symphonic Band, Basketball Band, Trumpet Choir, and Jazz Bands. The Sound of the Storm performs music from a wide variety of styles (classical, jazz, rock, worship), including new contemporary music stylings such as Kirk Franklin’s “Smile” and Hezekiah Walker’s “Every Praise”. The Sound of the Storm can be heard at every SNU home football game: Every tune is a wall of sound!

Spears has served as the SNU professor of trumpet since Spring 2017. The SNU trumpet studio is made of students from a variety of majors including music performance, music education, commercial music, bio chem, psychology, etc. Many studio members have participated in All-State, Regional, Honor, and homeschool bands. In 2019, three studio members participated in the OMEA Intercollegiate Band, ranking in the top 5 placements of the section. Members of the studio have also participated in the National Trumpet Competition semi-final and final rounds. Two members placed second place in the pre-college ensemble division prior to their entry to SNU while receiving private lessons from Professor Spears. Members of the trumpet studio can be heard practicing in the practice rooms anywhere from 6:00am to midnight. The studio motto of “Let’s Fire It Up!” is often heard being referenced among studio members.

A native of Ashland, KY, Spears holds a Bachelor of Music Education Degree from Morehead State University, and a Master of Music Degree in Trumpet Performance from Eastern Kentucky University. While at Morehead State he was under the tutelage of Professor of Trumpet Greg Wing, and while at EKU he served as the graduate teaching assistant in Trumpet, Theory, and Jazz. Spears is nearing completion of a Doctor of Musical Arts Degree in Trumpet Performance at the University of Oklahoma, where he also served as a graduate teaching assistant to Dr. Karl Sievers, OU Professor of Trumpet.

Prior to residency in Oklahoma, Spears spent many years on the road as a professional musician. He has toured with many Broadway shows such as “Beauty and the Beast”, “Elf”, “A Christmas Story”, and “A Chorus Line”. Spears has also played with artists such as The Temptations, The 4 Tops, Wycliff Gordon, Dave Koz, and Sandi Patty. Spears is currently a member of the Crossings Community Church orchestra and leads the SNU faculty brass quintet.

When Spears is not working with students or performing, he enjoys his time at home training his Miniature Australian Shepherd, Botti.