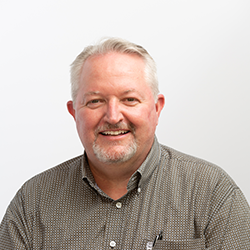 R​on​ Titus became the director and principal of the SNU Lab School in July 2019. He is a certified superintendent, principal, and teacher by the state of Oklahoma and the Association of Christian Schools International. Mr. Titus has chaired and been a member of numerous accreditation teams throughout the south-central region over the past two decades. Prior to joining SNU, Mr. Titus was instrumental in the strategic growth and development of Crossings Christian School in OKC for 13 years. He also served as the Internet Technologies Program Director at Francis Tuttle Technology Center for five years. Ron began his career in education as a technology director and teacher for five years at Deer Creek Schools in Edmond, Oklahoma.

Mr. Titus earned his masters degree in Educational Leadership from Southern Nazarene University where he was inducted into the Kappa Delta Pi Honor Society. He also earned a bachelors degree in Liberal Arts with minors in Psychology and Art Education from the University of Central Oklahoma. Before becoming an educator, Mr. Titus served in the United States Air Force during the Gulf War.

Ron is a champion of Project Based Learning across all disciplines, particularly with technology. He is also an advocate for developing Social Emotional Learning skills so people can more effectively cope with life’s difficulties. Both of these areas have been heavily emphasized at the Lab School over the past half century.

Ron has an insatiable desire to learn, loves to read, play guitar, create, invent, and tinker with convergent technologies in his free time. Mr. Titus is a Nebraska Cornhusker and NY Yankee fan and has coached more than 900 baseball games. He enjoys spending quality time traveling with his son, Elijah, and has a cat named Sparky.

Favorite Verse: “Do not conform to the pattern of this world, but be transformed by the renewing of your mind. Then you will be able to test and approve what God’s will is—his good, pleasing and perfect will.” Romans 12:2