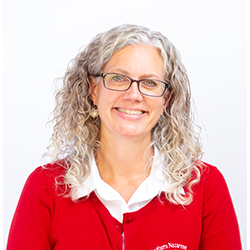 “After an extensive and thorough vetting process of choosing between more than a dozen candidates, Melissa was the top choice,” said Dr. Mark Winslow, Vice President of Academic Affairs for PGS.

Dr. Lewis has proudly served the University since 1999. For 19 years, she worked in the School of Music, eventually serving as the school’s chair. She began a new position in 2018 as the General Education Director for Professional Studies and quickly developed a passion to serve adult learners. Out of that passion, she led the development of SNU’s Associate of Arts in General Studies program.

“Under Melissa’s oversight, the quality and breadth of General Education courses have improved significantly and the number of learners has increased dramatically,” Dr. Winslow said.

Looking ahead to her new role, he continued: “Melissa is a strong collaborator, an open and receptive listener, and a systems thinker—with a penchant for efficiency and effectiveness. Her expansive skillset and leadership capacity will be a great asset to Professional and Graduate Studies.”

Prior to her SNU days, Dr. Lewis completed master’s and doctoral degrees from the University of Cincinnati College-Conservatory of Music in Viola Performance. With a continued commitment to lifelong learning she also received an Ed.D. in Education and Administrative Leadership from SNU in December 2021. Her research was focused on the use of social power in adult educational environments.

“I love SNU and am honored to serve in this new capacity. The new year brings a refreshed commitment to make Christ-like disciples through higher education in Christ-centered community, and there is no community in which I would rather serve than SNU,” Dr. Lewis said.

Dr. Lewis has been married to her husband, Chuck, for 19 years and is the proud mother of their daughter, Natalie. They enjoy traveling together, family adventures, playing games, and have an extensive family bucket list.