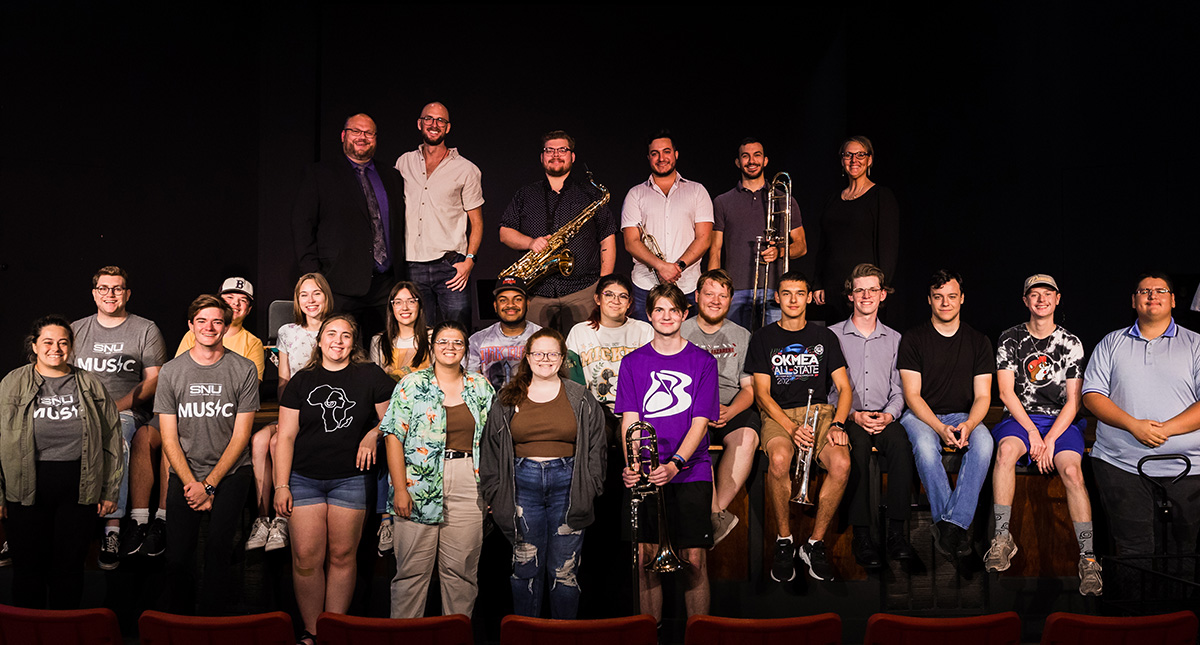 Most aspiring vocal students at Southern Nazarene University have their sights set on making it big either in major opera houses, such as New York’s Metropolitan Opera or on celebrated Musical Theater Stages, not unlike those in New York’s Broadway Theater District. Most people rarely consider the perspective of the Instrumental “Pit” Musician. However, the day-in and day-out performances of these professionals make it possible for popular musicals to be successful in long runs of production, sometimes spanning decades with the same personnel in the same theater.

On the afternoon of September 9, 2022, the SNU School of Music Students and Faculty were fortunate to experience a world-class treat. The Broadway Band for the Touring Musical “Hairspray” came to the SNU campus and presented a Masterclass and Clinic in Cantrell Hall.

The clinic started with an introduction of each of the guest artists:

The masterclass continued with the band performing certain selections from the musical “Hairspray” for which they are on tour. This was followed by each of the musicians taking a few minutes to share their background, education, training, teaching, and playing experience. The importance of developing a routine and managing one’s time while on the road was a highlight of the presentation. SNU students gained a great deal of valuable perspective from the Question and Answer Session with the guest artists, but perhaps the most exciting and beneficial portion of the event came when our students sat down in the chairs of the professionals and took turns playing on passages from “Hairspray” the musical.

The most humbling moment of the day came after the clinic was over. It was then that our Director of Bands and Professor of Trumpet, Prof Ricky Spears, shared his connection with the “Hairspray” Broadway Band, explaining that he had toured in the past with Ryan, the Bass player in the current touring band. Ryan had been a trumpet player in high school but was now working as a professional Bassist. Amazingly, Ryan’s gave his trumpet to Prof. Spears at the end of a musical tour run with the instructions to “take this trumpet to share with a student who needs it.” As only divine providence would allow, Professor Spears placed that trumpet in the hands of a high schooler named Nathaniel, who was taking lessons at SNU. Nathaniel used that instrument to audition and compete in the Semi-Finals of the National Trumpet Competition. Nathaniel used the same horn for his SNU School of Music Audition and was awarded a music scholarship. Once he became a student at SNU, this same horn helped him shape his craft into a career, as he used it in a rigorous audition cycle that ultimately placed him in the employment of the Army Reserves Military Band in OKC.

To say that good things are happening in the SNU School of Music is an understatement. While it is obvious that great musical feats are being accomplished through the work of SNU faculty and students in our School of Music, it is clear that God is making a path for success through our programs for musicians who feel called to be of service to His Kingdom. In the words of the great Johann Sebastian Bach, “Soli Deo Gloria.”

This article is written by SNU’s Fine Arts Recruiter, Dr. Lacey Phelps. If you know a young, aspiring musician who would like more information on our music events or scholarship auditions, have them contact her today.